In ancient times and even today power is expressed through architectural achievements all around the world.  The continuous competition to build the tallest structure, the largest dome, and the grandest entrance has been a trend since the ancient times. Besides, this competitive nature led to the rise and development in architectural typologies, styles, methods of construction, and engineering resulting in the creation of mesmerizing architectural wonders.

Let us enlighten our brains with some of the tower wonders built in India that changed the dynamics of architecture is perceived as not just art but also a calculative skill of engineering, science, and architecture. 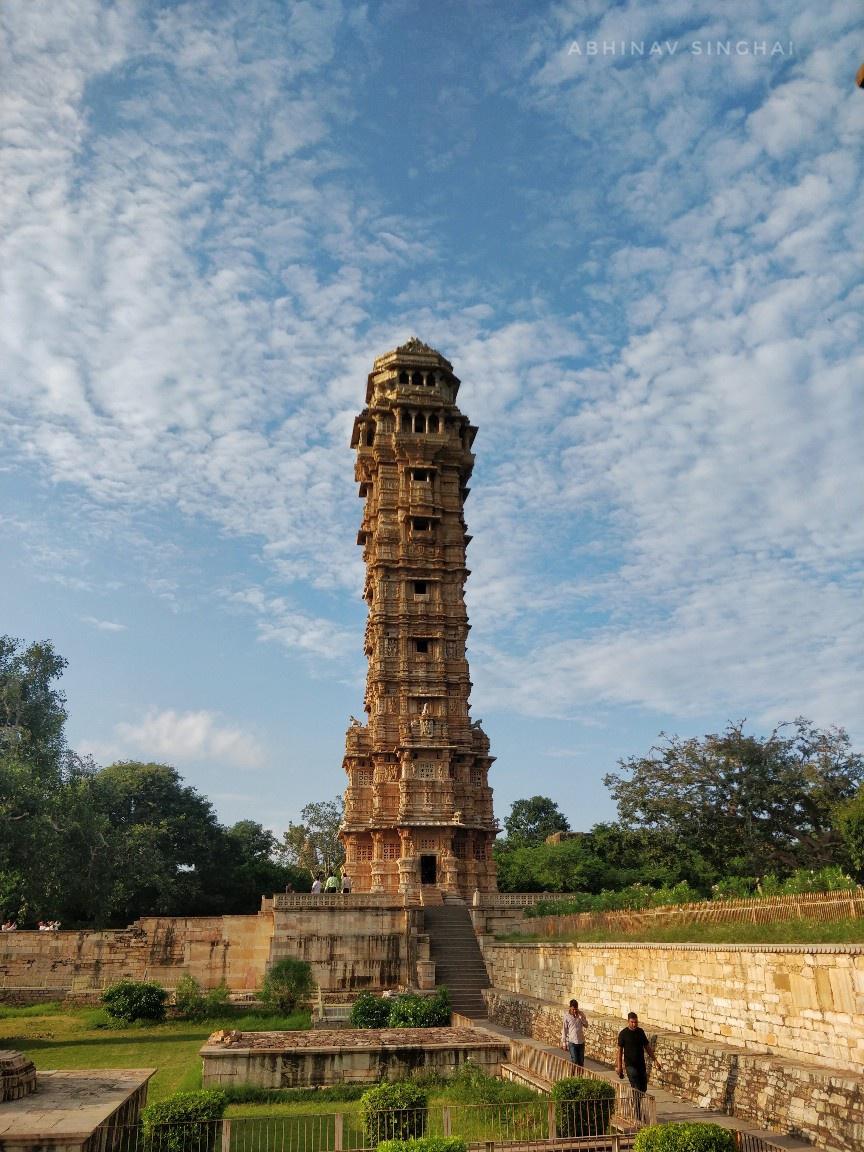 Vijay Stambh situated in Rajasthan is a very well recognized symbol of pride of the Mewar Rajputs. The tower is 112 ft. high, built in the remembrance of Mewar’s great victory in a battle with Mahmud Khilji and Qutubbuddin in the 15th century. When Rana Kumbha captured the Nagore region from Qutubuddin the rivalry between the two escalated. This led Qutubbuddin to seek help from Mahmud Khilji (who was a rival of Rana as well) to take revenge. Khilji and Qutubbuddin attacked Rana Kumbha in Gujrat simultaneously with a large army. Although Rana’s army was very small in comparison to the enemies, they fought with great valor and courage and defeated them. It was an impossible victory for Rana Kumbha and the celebration was supposed to be grand.

Unlike any other King, Rana decided to celebrate this grand victory by constructing a tall structure to commemorate the power, valor of the great victory. His idea of the Victory tower was not just to commemorate this achievement by building a tall structure that would withstand time but also to display the richness and power of the Rajputana Lineage. The location of the Vijay stambh was critical because the king wanted it to be visible from all directions even from a great distance. From the seventh to 16th Century, Chittorgarh Fort has been a very important and influential throne in Indian history. Chittorgarh Fort is situated 500 ft. above the ground on a hill and was the perfect location was building Vijay Stambh from where it could be discernible from the farthest distance.

Building a nine-story tower with the heavy red sand-stones that could withstand time and nature was not a simple task. The wind speed at higher levels could easily twist the tower and the self-weight of the tower could lead to compression and buckling in the structure. Architect Jaita very smartly tackled this by creating an outer gallery and a central chamber connected via a staircase. This trabeated structure that is columns, beams and bracket construction had stones carved first and then placed in position.  The wind load is reduced by providing an open central chamber and the outer gallery. The staircase, which connects the outer gallery and central chamber, helps in distributing the load of the structure evenly.

Sandstone is a locally available soft building material, which makes carving on it an easy job. The Rajputana Grandeur is highlighted through the carvings on the tower. The tower is highly ornamented by carvings of gods, goddesses, animals, weapons, etc. throughout the structure. On the top floor of Vijay Stambh, the lineage of the Rajputana kings and their thrones are carved beautifully to signify and portray the victory celebrations. It is recognized as one of the World Heritage Sites in India. 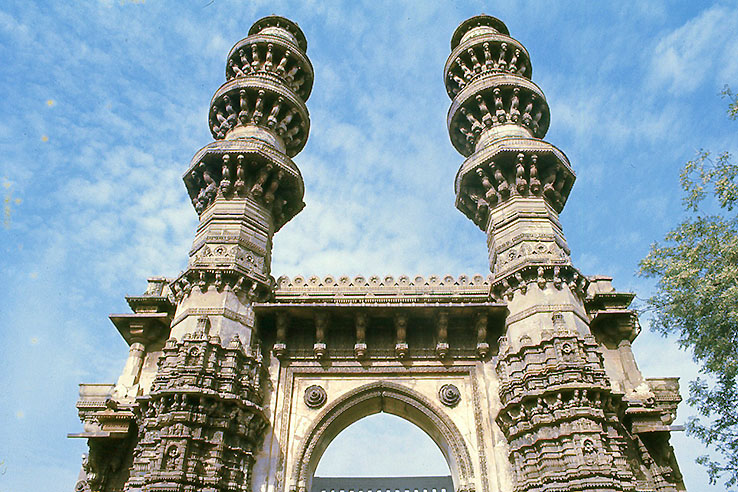 The Sidi Bashir Mosque was constructed in the remembrance of Sidi Bashir (loyal slave of Ahmed Shah). It is situated in Ahmedabad. The specialty of this mosque is its entrance gateway, which has two swinging minarets. These are the tallest minarets of Ahmedabad and have the ability to swing back and forth when pushed. This swinging effect caused in these two minarets is not any technical defect or any deformity developed over time. Massive earthquakes have hit Gujrat and caused serious damage to a lot of buildings but not these towers. From the past six centuries, these minarets still manage to stand tall with as a result of the perfect engineering, architectural, and skills of the artisans. 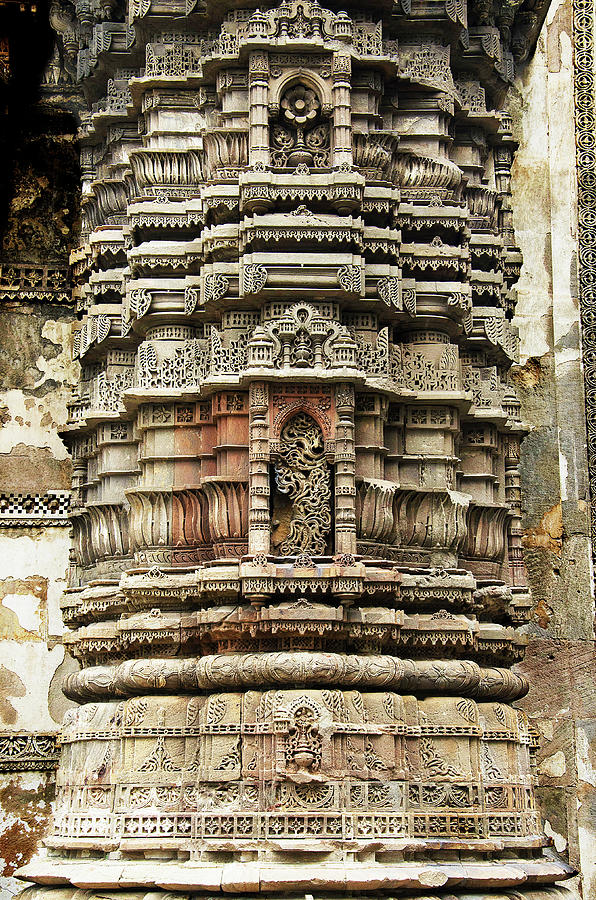 The minarets have highly decorated exteriors with windows facing East and West with a spiral staircase running inside the hollow towers. The base of the structure is quite broad and is tapered gradually with an increase in height. When one of the minar is pushed, it starts swinging and a few seconds later, the other minar starts swinging as well. They swing in such a rhythm as if the same frequency is acting on both the minarets. In this 70 feet high structure, no metal has been used and it is entirely comprised of sandstone.

How do these towers swing anyway? It can be said that due to the horizontal groves present in the towers, the bending moment of the structure is increased significantly causing it to sway back and forth when force is applied. The mortar is made up of natural materials, which is believed to provide some flexibility to the structure.

What is even more astonishing is that the passage or the middle arch that connects the two towers experiences no vibration at all. So how do these vibrations transfer from one minar to another? Well, it is assumed that there is a possibility of an air tunnel to be present underground that joins these two towers together. However, there is no proven evidence to state this theory.

Two similar towers were present in Raj Bibi Mosque in Ahemdabad, which were dismantled by Britishers to find out about the mystery behind their swinging. However, they were unable to discover anything and could neither reconstruct them. There are only two places in the entire world where swinging minarets are present. Monar Jonban meaning shaking minarets in Persian is situated in Isafan, Iran. These minarets swing as well along with the connecting arch but are damaging due to shaking, unlike the Jhulta Minarets.

So many mysteries in this world are still unexplained irrespective of the technical advancements we have today. Well, there are things that the ancient people easily figured out and we still cannot. So let us just take this moment to admire Ancient Architecture.

‘Harry Potter’: The Chosen one of the Millennials