Be it Politics, Science, Sports, Music, Art, Culture, or human thinking, everything influences Philosophy. And contrastingly all these things make up the philosophy. Philosophy and philosophers have been the crucial key in shaping the world. We have a human history because somebody followed and believed a philosophical idea. Here is the list of a few, precisely 7 such philosophers whose teachings are still strong and accepted. So without much ado, let’s have a look.

Taoism is both an ideology and a way of life. Lao Tzu, who lived about 600 BC, was the one who began it all. The word “tao” means “way” or “direction.” Lao Tzu served as a collector of records. He concluded that satisfaction came from people just “going with the flow,” or allowing events to unfold naturally rather than pressuring them.

To practice Taoism, you must first understand yourself, and then everything else will fall into place. One may “accomplish all” by “doing nothing.” Don’t fight what you’ve gone through; instead, work through it and learn about it, and never push it because you won’t be doing yourself any good. Tales of Lao Tzu and the Tao Te Ching survived through various Chinese philosophical schools for over two thousand years, and have been lavishly embellished in the process.

To the mind that is still, the whole universe surrenders.

Aristotle was a well-learned Greek philosopher. He was Plato’s student and the curator of the Lyceum. On any topic, he kept a teleological perspective. The highest-end, according to Aristotle, is the human good, and the highest-end sought, in reality, is happiness. Aristotle also believes that success can only be attained by leading a good life.

Human virtue, according to Aristotle, refers to the virtue of the mind rather than the body, just as human happiness refers to the happiness of the soul. Human virtue can also be the state of character that makes them successful and allows them to do their own job well. It’s a character trait that’s all about making decisions, and it’s in the center of the pack when it comes to us.

We are what we repeatedly do. Excellence, then, is not an act, but a habit.

Confucius’ philosophy was mainly that of morals and politics. It was built on the idea that heaven and earth would coexist in peace and equilibrium while still being dynamic. These factors, he taught, support human beings, and they must aspire to imitate the celestial paradigm. The aim of Confucianism is to make a man not only noble but also a man of learning.

The concept of obligation is broad beyond morality to include the finer details of everyday life. Happiness, according to Aristotle, cannot be achieved in living for fun since such a life is slavish. It’s also not found in the pursuit of respect, because honor is based on what others think of a human, not on what he thinks of himself. Furthermore, according to Aristotle, a person’s satisfaction can be determined by deciding the role of the human soul.

Never do to others what you would not like them to do to you. 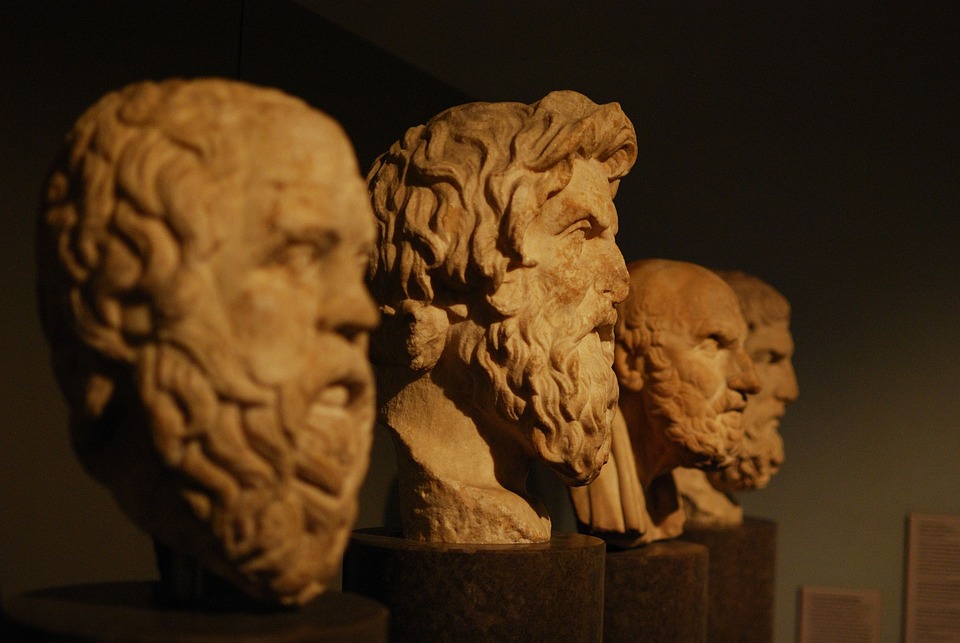 Philosophers of Greek – Image by morhamedufmg from Pixabay

Karl Marx’s reputation stands out more than any philosopher in the history of social thought. He penned some of the world’s most groundbreaking intellectual writings. Indeed, his writings — so crucial to the human condition during his lifetime that he was banished from his homeland.

Marx believed that capitalism’s structural inequality and aggression would eventually lead to its downfall. He defined capitalism as a production structure under which the ruling class and the working class have underlying conflicts of interest, and that these conflicts bound up in the idea that the latter must sell their labor to the former for salaries that give a little stake in production.

Revolutions are the locomotives of history.

Socrates was a well-known scholar and philosophers in ancient Greece. His pinnacle came at the time of the Peloponnesian War, where the Spartans beat the Athenians and brought the Golden Age to an end. Plato’s works are primarily responsible for Socrates’ status as one of history’s most prominent thinkers.

The so-called Socratic Method, which entails the use of questioning and debate to foster open discussion on complex topics and lead students to their own perspectives, is particularly evident in the Platonic dialogues. And, given that Socrates is well regarded as a teacher of thinking and wisdom, it is perhaps fitting that his most well-known contribution is a method of addressing education that is still profoundly important today.

One thing only I know, and that is that I know nothing.

Swami Vivekananda was one of the most notable philosophers of his time. Swamiji desired a positive exchange of ideas between the East and the West. Western technologies can support the needy, and ideals held sacred by the East for thousands of years can be taught to the West in return. He spoke about mass education, going door to door with a torch, graphs, charts, and so on. Swamiji was still optimistic and forward-thinking, and his disciples must be as well.

Swamiji often referred to good education as ‘man-making,’ since it facilitated a person’s overall development: physical, intellectual, mental, moral, and spiritual. Education, he described, is “the embodiment of perfection already in man.”

You have to grow from the inside out. None can teach you, none can make you spiritual. There is no other teacher but your own soul.

Stoicism: established around 300 BCE by Zeno of Citium.“Happiness is a healthy flow of life,” he said. How will that be accomplished? Peace of mind that results from leading a virtue-filled life in harmony with reason and nature.  While this philosopher developed much of Stoicism’s principles and practices, Stoicism evolved over time in response to the ideas and beliefs of later Stoics.

Following his death, the Athenians installed a bronze monument in his name,  extolling a man who was a real model to whom we can look today. After Zeno, Stoics taught a type of Stoicism that stressed pantheism, or the idea that God is not one entity but resides in everything.

“Better to trip with the feet than with the tongue.”

Yes, it is difficult material; it is nothing more than the research of vast and profound questions regarding nature, understanding, principles, reason, intellect, and expression. We don’t claim to have covered anything there is to know about the subject of profound philosophers and their teachings. Here is a complete wiki list of philosophers. To be truthful, there are hundreds and hundreds of scholars who have doubted, questioned, and arrived at their own answers. Click here to read an article on all-time favorite books on philosophy.