Sarojini Naidu – The Poet and the Politician

Sarojini Naidu – The Poet and the Politician

Sarojini Naidu, also popular as ‘Bharat Kokila’, was an active participant in the Indian national movement for Independence. Her distinguished work as a poet earned her the title of “Nightingale of India”. Gandhi appreciated her sense of imagery, color, and choice of words in her writings and thus gave her the title. Her literary work reminds us of the sacrifice made by armies during times of war. Her poems are rich in love for her land, and her opinion about equality.

Born in Hyderabad to a Bengali Brahmin Family, Sarojini Naidu was the eldest child to Aghorenath Chattopadhyay and Barada Sundari Devi Chattopadhyay. Her father served as a principal in Nizam’s college and her mother used to write poems in Bengali. Pursuing arts in the era of Englishmen was an unsafe choice. Nevertheless, her family supported her love for arts. She did her education at the University of Madras and King’s College of London.

She met her spouse, Paidipati Naidu when she was 19 years old. Paidipati Naidu was a physician. They married after she completed her education. Both the families approved the marriage, though belonging to different castes and regions. Paidipati belonged to the Andhra province of India, while Sarojini was from Bengal.

Sarojini had a liberal yet strongly opinionated upbringing. Therefore, She had a natural attraction towards the Indian national congress movement for independence. In the beginning, Gandhi was reluctant in allowing females to join the salt march in Dandi. However, after consistent influence by Naidu, Kamaladevi Chattopadhyay, and Khurshed Naoroji, he changed his decision. Naidu led the women marchers and, like countless others, she went behind bars for the satyagraha movement. She became the president of the Indian national congress and later went on to become the governor of the united provinces (Uttar Pradesh). Sarojini was the first lady of United India to become the governor. Moreover, she remained in the office until her last breath.

Writing Career as a Poet

Sarojini Naidu led a promising literary life and attracted notable several intellectuals to her well-known salon in Bombay. Her first volume of poetry, The Golden Threshold, followed by The Bird of Time was well received. “In the Bazaars of Hyderabad” was highly appreciated by the critics. Soon after that, she became a fellow of the Royal Society of Literature. She collected poems, all of which she wrote in English issued under the titles,  The Sceptred Flute and The Feather of the Dawn. All of her poems show the attributes of feminism, patriotic duty, pride to the motherland, nostalgia, and tributes to the army. One such poem that lingered with the fragrance of patriotism is “The gift of India”. Below is an extract of  “The gift of India” poem.

When the terror and tumult of hate shall cease

And life be refashioned on anvils of peace,

And your love shall offer memorial thanks

To the comrades who fought in your dauntless ranks,

And you honor the deeds of the deathless ones,

Remember the blood of my martyred sons! 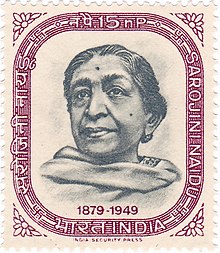 Naidu died of a cardiac arrest on March 2, 1949, at the Government House in Lucknow. At last, her last rites were performed at the Gomati river.

Eleanor Helin at Palomar Observatory in 1990,  discovered an asteroid 5647. In fact, it was named Sarojini Naiduin her memory.

The English writer  Aldous Huxley wrote, “It has been our good fortune, while in Bombay, to meet Sarojini Naidu, the newly elected President of the All-India Congress and a woman who combines most remarkably great intellectual power with charm, sweetness with courageous energy, a wide culture with originality, and earnestness with humor. If all Indian politicians are like Naidu, then the country is fortunate indeed.”

To read more about more such women who changed the world, Click here.