We live in a scientifically aware world where facts and hard evidence play an essential role in our life. Yet, we still have fantasies related to myths and folklore of ancient times. In recent years we witnessed Roman and Greek mythology taking center stage in mainstream millennial culture. This cultural reset encouraged many people to explore myths and legends in various cultures. Moreover, the introduction of anime and manga that constantly referred to Japanese Mythology was a game-changer. So, While you are enjoying a laid-back afternoon with Japanese sushi and binge-watching anime, allow us to introduce you to the world of Japanese mythology.

Japanese mythology is an epic saga of adventurous folktales that reflects the deep meaning of life. It has heavy influences from Shinto and Buddhist traditions and stories. Deities, royalty, and nature are the common theme of Japanese mythical tales. For generations, these tales passed on in the oral and written form. The legendary tales of the Sun Goddess, animal spirits, dragon kings and the underworld will leave you enchanted. The two major sources of Japanese mythology are Kojiki (Records of Ancient Matters) and Nihon Shoki (Chronicles of Japan).

So, here is the list of 5 famous legends of Japanese Mythology:

Kojiki (Records of Ancient Matters) and Nihon Shoki (Chronicles of Japan) is the source of the Japanese creation myth. According to the legend, the two gods Izanami and Izanagi were ordered to stir the ocean with a jeweled spear. The first island came to existence with drops of crystalized salt after the withdrawal of the spear. They named it Onogoro-Shima and hosted their wedding ceremony. During the ritual of marriage, Izanami (female deity) wrongly told the first words, and as a result, their first two children were deformed and ugly. They soon realized that the reason for their misfortune was an incorrect marriage ceremony. They corrected their mistake and procreated auspicious offsprings that now are the eight principal islands of Japan: Awaji, Shikoku, Oki, Tsukushi (Kyushu), Iki, Tsu, Sado, and Oyamato.

The Sun, the Moon, and the Wind

Izanami died during the childbirth of Kagutsuchi (the Fire God). The loss of her beloved wife left Izanagi devastated and he decided to bring her back from Yomi-Tsu-Kuni (the underworld). Izanami requested Izanagi to not look at her, however, Izanagi lit the torch and found her wife’s rotting corpse. Izanami felt provoked. Hence, sent hideous female spirits, thunder gods, and an army of fierce warriors after him. Izanagi somehow managed to escape and block the passage between Yomi and the world of living with a boulder. As he purifies himself more deities start appearing. Other important Gods like Amaterasu (Sun), Tsukuyomi (Moon), Susanoo (Wind) came to life when Izanagi washed his face.

Amaterasu and the Cave

This mythical folklore tells us the tale of the rivalry between Amaterasu and her brother Susano-o. According to the famous tale, the Sun Goddess hides in the cave and seals the entrance with the heavenly rock. The upper and middle worlds plunged into the darkness.

Thus the gods called an emergency meeting by the heavenly river of Serenity to discuss the ways to bring Amaterasu out of the cave. They decided to place cocks, a large Sakaki tree, jewels, and a large mirror outside the cave. The goddess of art Ameno-uzume started swaying her and whirling her bare body leaving a hypnotic effect. Amaterasu’s curiosity got the best of her. She slid the heavenly rock to take a look. Ameno-uzume told her about the arrival of the new god. She failed to recognize her reflection. Ameno-tajikarao pulled her out of the cave. Later, praises were showered on her. Her return enlightened the upper and middle worlds. 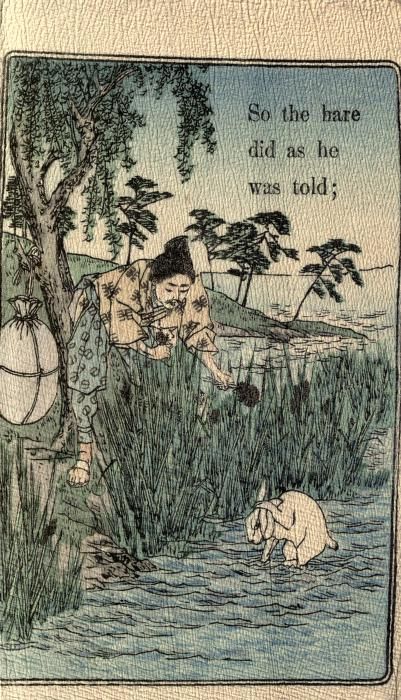 In Japanese mythology, animals have a symbolic meaning. The tale of Hare of Inaba is divided into two small stories- The Rabbit and the Wani and Yasogami. The hare is usually portrayed as a wise animal. Here, he is shown as a foolish animal who suffered because of his deceiving scheme. The Wani (crocodile) outrageously attacked the hare after he came to know about his scheme. The second part talks about the encounter of the hare and Oonamuchi, god and master of the land. Oonamuchi was visiting Princess Yakami in Inaba Province with his elder brothers. When one of the brothers saw the hare suffering he suggested the hare bathe in the sea and worsened his wound. Oonamuchi, on the other hand, suggested that he bathe in a freshwater river and roll the pollen of cattails. The hare prophesied that Oonamuchi will be the one to marry Princess Yakami.

The Japanese Legend of Emperor Jimmu

Emperor Jimmu was the first emperor of japan and a direct descendent of the Sun Goddess, Amaterasu. He is also the founder of the Imperial dynasty. He shared a very special bond with the people of Japan. The special bond helped in the smooth governance of Japan.  He was born on the first day of the first month (660 B.C.E). He died on the eleventh day of the third month (585 B.C.E) according to the Japanese calendar. However, historians are skeptical about his existence due to a lack of evidence. The people of Japan celebrate 11th February as Commemoration of the founding of Japan day because it is the accession date of Emperor Jimmu.

To sum up, mythology legends happen to genuinely set in the soul of Japan. Moreover, the mystical tales and mythological legends of Japan are a great way to understand the beautiful culture of Japan. Another interesting attribute of Japanese mythology is that it explains the origin of the imperial family. Thus the ruling class strengthened its authority in Japan. The debate of facts and fiction is never-ending but these compelling stories of love, life, and loss are a reflection of human complexity.

Tagged under: Amaterasu and the Cave, facts and fiction, Hare of Inaba, Japanese mythology, Japanese Tale of Creation, The Japanese Legend of Emperor Jimmu, The Sun the Moon and the Wind