After all these years of awareness and campaigns, women still face trouble achieving their dreams for being a woman. When talking about their career in a corporate world, they struggle to find a job, let alone getting promotions in the company. How would you feel if you are gett less than your male colleague who is doing the same work as you?

There is always the intervention of stereotypes associated with the females that disrupt their progress. The preconceived notions of society, people think men as more talented, ambitious, and strong leaders, marginalizes other genders. When the gender roles, it is the ‘duty’ of women to care for children, and what about the father? Working mothers have to pay the motherhood wage penalty resulting in a pay-gap, compared to men and non-mothers. According to a study, only 29% of women are in the senior management of all companies. Why so? Since all the board members are men the innate favoritism toward those who are alike is bound to happen. Hence, women lose out on opportunities. They are stereotyped as less-committed, talented, and much more. 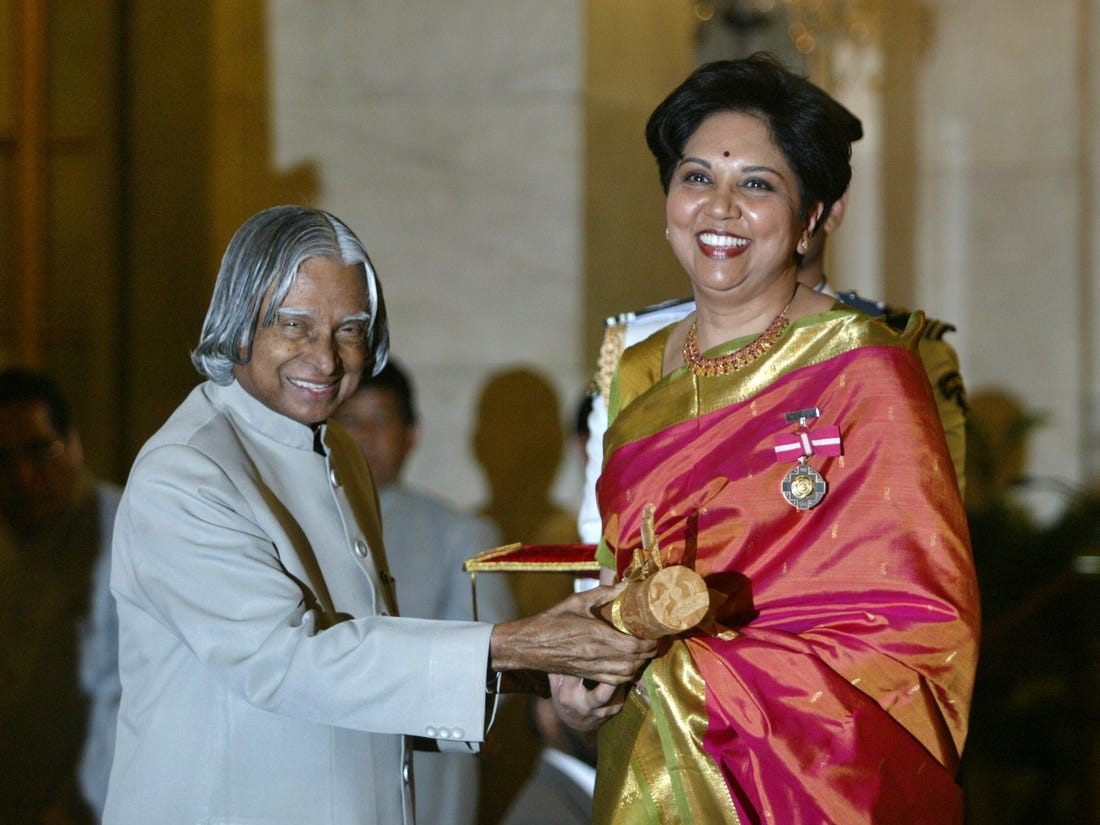 Indira Nooyi came in Top 100 most powerful women. She is a woman of Indian origin who shattered the glass ceiling by proving that there is much more to a woman than just being a mother. She was born on October 28, 1955, in Chennai. In 2007, she received the Padma Bhushan award. Moreover, for two consecutive years, she was in the top 10  influential people in Times Magazine. Indira Nooyi grew up in a middle –class family in India. She claims that their family was not that rich, but they never felt short of anything. Now, her net worth is approximately $6.5 billion. Being brought up in a conservative Brahmin family, education was a significant part of her life.

Despite being the nerd that she is, she also explored other co-curricular activities. She was a part of a rock band and played in an all-girls band. Her hobbies included playing guitar, karaoke cricket, and climb trees too! Indira Nooyi was extremely hard working. She worked at as a dorm receptionist and did a graveyard shift to make 50 cents more. She completed her graduation from Madras Christian College in the year 1976, in chemistry. After that, she earned a master’s degree in business from the Indian Institute of Management, Calcutta. Moreover, she earned a master’s degree in public and private management from the Yale School of Management in 1980.

She comes on the list of one of the most powerful business executives and corporate leaders. During her college, she worked with many companies. Currently, she works with Amazon. However, her contribution in making Pepsico, the soft-drink company, one of the most renowned is what made her popular. While she was a CEO at Pepsico, she was one of the highest-paid CEOs worldwide.

Let us dive into the career ladder of Indira Nooyi from the beginning. Initially, she began by working as a product manager at Johnson & Johnson. After that, she also worked at a textile firm Mettur Beardsell. She also did an internship with Booz Allen Hamilton while she was at Yale School of Management. After graduating from Yale, she worked as a corporate strategist at Boston Consulting Group. She left no stone unturned to keep marking her progress in every company that she worked. Companies like Motorola and Asean Brown Boveri in 1986 and 1994 promoted her to senior-level management roles. The go-getter attitude and her leadership skills manifested her value and the contribution that she made to the companies.

In 1994, she conflicted about whether to join GE and Pepsico. When the concerned person at Pepsico was made aware that she was more inclined towards joining GE, he immediately made a perfect pitch to Nooyi. He made her believe that his company needs an employee like her and she working in the company would be a great honor for them. Soon, she joined Pepsico as senior vice-president of strategic planning. Eventually, she got the promotions she deserved and in 2006, she was the first female CEO of Pepsico and 4th CEO of the company.

Her lucrative strategies and the way she restructured the company immensely affected its life and reputation. Restaurant chains such as the K KFC, Pizza Hut, and Taco Bell, a.k.a Yum! The brand became a part of the company. During the acquisition of Tropicana, she played the main role in expanding the market of Pepsico in the non-fizzy drinks sector. Additionally, she aided in the merger and acquisitions of the company with Quaker Oats Co and Gatorade. She played an instrumental role in introducing healthy products and lucrative packaging in the company. As a result, she was able to increase the revenue of the company by 80% during her tenure, from $35 billion to $63.5 billion In 2018, after a fulfilling tenure at Pepsico, she stepped down from the designation of CEO. Now, she works in Amazon as a part of the board of directors. She was an absolute epitome of how women could be at par with men in corporate, and she was a corporate genius.

Some Secrets behind her Success

There many principles and habits that led Indira Nooyi to where she is now. While she was young, her mother created hypothetical situations for them such as what would they be if they were a Prime Minister or which leader would they want to be like? After that, she used to ask them to prepare speeches related to the same. At the dinner table, where they used to recite their speeches, she would tell who won. This activity helped her to inculcate traits of leadership, perseverance, and confidence. Nooyi is popular for her ability to solve problems. She says that her research skills helped her to simplify a complicated task. Indira was a avid reader and consulted professors from the university, only to understand the concepts and implement the solutions in the company.

She believed in the boon of good and supportive parenting. Once, when she went to India and visited her parents, she observed that everyone congratulated her parents for her success. Then she concluded that the parents who helped to raise such great people rarely get recognized for their sacrifices and hard work. As a result, when she went back to America, she wrote more than 400 letters to the parents of the senior executives. This gesture made the employees and their parents immensely happy.

Indira Nooyi said, “I grew up with a mother who said, ‘I will arrange a marriage for you at 18,’ but she also said we could achieve anything if parents put our minds to and encourage us to dream of becoming prime minister or president.” Her journey as a woman, student, daughter, mother, and CEO is inspirational. It highlights the fact that a person can choose his or her goal irrespective of gender roles they are supposed to pay. Hard work and belief in oneself can overcome all obstacles.

Human Rights: A Struggle Of Being A Woman